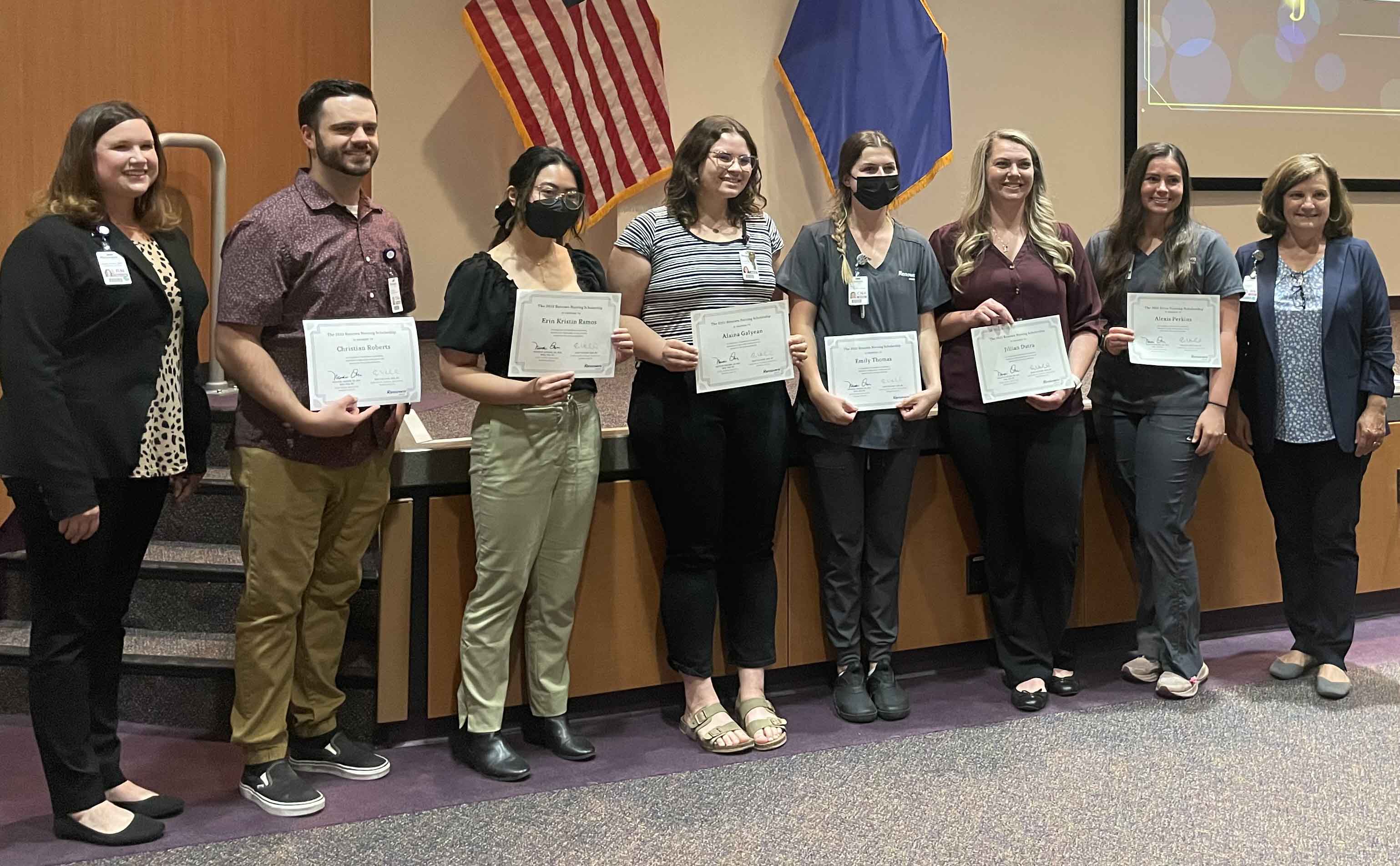 Thirteen area nursing students were the stars of the show today at an event celebrating nursing education. Renown Health leaders held the 2022 Nursing Scholarship Award ceremony to recognize future nurses making a genuine difference in the lives of others, and awarded scholarships to help them pursue their education.

Scholarships were presented to thirteen nursing students who are also working at Renown Health and currently pursuing their nursing degrees. Today’s financial awards build on scholarship support from The Cherie Elvin Memorial Fund, which was created by the Elvin Family as a legacy to honor their mother, Cherie, who died at the 2011 Reno Air Races.

Members of the Elvin family attended the event via video link, and spoke to the group after watching a clip from Broken Propeller, an online documentary film by producer/director Christine Lazzarini that honors the heroes who responded to the tragedy on 16 de septiembre de 2011. It was on that day that The Galloping Ghost, a highly modified North American P-51D Mustang racing aircraft, crashed into spectators while competing at the Reno Air Races in killing the pilot, James K. "Jimmy" Leeward, and ten people on the ground. Sixty-nine more people on the ground were injured. It was the third-deadliest airshow disaster in U.S. history.

The 2011 air race crash had an immeasurable impact on the entire Elvin family. Cherie, 73, lost her life, while Chuck, her husband of 52 years, their two sons and daughter-in-law all lost part of their right legs. The family received treated at area hospitals and is still grateful for the care, kindness and support received in northern Nevada. Cherie's son, Bill, and daughter-in-law, Rachel, spoke to the group saying, “As the Elvin family we honor and remember Cherie and work to support nurses in our community.” The care the family received from the physicians, nurses, hospital care providers, EMS teams, and the community inspired the Elvin Family to increase their funding from one scholarship to three scholarships.

To recognize the dedication and sacrifice, and to encourage others to pursue a nursing education, the nursing leadership team and Renown Health Foundation donors, for the first time, also awarded scholarships to ten additional recipients for a total of 13 awards. Each scholarship is valued at $1,000 and awarded to employees who are committed to working at the bedside, convey the fundamental qualities of a nurse and look to connect with patients recovering from traumatic situations.

Kami Sherpa, who is a critical care technician in Telemetry, wants to work as a registered nurse in Telemetry or the Intensive Care Unit when she graduates. She is currently attending the Orvis School of Nursing at the University of Nevada, Reno. Kami wrote, “I lost my grandad at a very young age. When he died, I decided to become a nurse and to do my best to make every person’s hospital stay a good one. I am the first person in my family to go to school and to earn a bachelor’s degree. This scholarship means so much. I know my mom and my grandma will be proud. I promised them I would take care of people in need and ease their pain. Nursing is my passion in life.”

Nursing is an extremely rewarding career, and it has the added benefit of being in high demand. However, getting through nursing school takes a lot of hard work—and it can be expensive. According to the

Bureau of Labor Statistics (BLS), in 2019, there were approximately 3 million people working as registered nurses in the U.S. Demand for the role is expected to increase by 7% from 2019 to 2029.

The average cost of nursing school can vary widely. The cost for a Bachelor’s in Nursing (BSN) can be comparable to any other four year degree. According to U.S. News, the average cost of tuition for the 2020-2021 school year was $9,687 for a four year public school, and $35,087 for a four year private school. Some may pursue other pathways, such as an online RN to BSN program, which can sometimes be more affordable ranging between $25,000 to $80,000 in cost. While this may seem costly, the median annual salary for an RN in 2019 was $75,330.

“There has never been a more important time to recruit and retain qualified candidates to become nurses,” said Thomas Graf, MD, interim CEO of Renown Health, as he announced the increased commitment of donors to Renown Health Foundation.

“Your journey to become a nurse includes a lifelong commitment to learning and showing up as your best self,” said Jana Elliott, Chief Nursing Officer for Renown Regional Medical Center. “Treat each patient as the most important person in the world to you. There is no more important or fulfilling work than to serve as a nurse.”

She added, “You are on an incredible journey filled with joy, fulfillment, and a deep sense of purpose. Being a nurse requires a passion for people, a profound belief in serving others; trust in your teammates, the ability to embrace change, flexibility and true grit. It is an incredible privilege to be a nurse and to serve others in what is, perhaps, their greatest time of need.

The scholarship recipients of the 2022 Renown Health Nursing Scholarships are:

Renown Health is currently hiring registered nurses and other positions at https://careers.renown.org/